Find a Church Near You 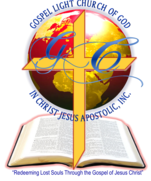 The History of The Gospel Light Church

​As the church grew immensely, there was an immanent need for more space to house the brethren during services. As a results, GLC purchased the building located at 684 Springfield Avenue (formerly owned by The Salvation Army), it's current location, in 1981.

​Our first Ministerial Elevation service took place in 1991 when Elder (now Bishop and Pastor) Smith, ordained our first Deacon. In April 1997, we purchased a vacant building at 688-692 Springfield Avenue alongside the church building. Soon after, construction began on what is now the Gospel Christian Academy Child Care and Learning Center.

​As GLC continued to grow, a property adjacent to the Gospel Christian Academy Child Care and Learning Center was purchased and converted into the Gospel Light Church Mission House affectionately known as the 'church house.'

​Gospel Light Church gives glory to God and is thankful for how He has kept the church from dangers seen and unseen over the past 40 years. There is nothing impossible with God and we believe that He will keep that good thing which He hath committed unto Him that day.

For thou, Lord, wilt bless the righteous; with favour wilt thou compass him as with a shield" -Psalm 5:12